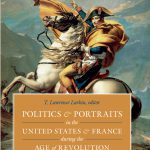 Politics & Portraits in the United States & France during the Age of Revolution is an anthology of essays prepared by portrait scholars from the United States, Canada, France, and Germany and published by the Smithsonian Institution Scholarly Press to mark the bicentennial of the burning of the federal buildings and the loss of national treasures at Washington, D.C., on the night of 24-25 August 1814. It explores the way portraits intersected with politics during the Revolutionary and Imperial Eras in The United States and France. Between the War of Independence of 1776 and the War of 1812, the United States maintained a complicated and tense political relationship with Britain and France, affecting patterns of trade and diplomacy, cultural representation, and consumption on both sides of the Atlantic. The transition from monarchical to republican forms of government was accompanied by a shift from aristocrats to citizens as the primary patrons, artists, subjects, and viewers of portraits. For this reason, images of heads if state, delegates, and their families often reveal an uneasy integration of old aristocratic forms and new republican values. The essays in this book examine representations of major figures such as Louis XVI and Marie-Antoinette, George Washington, Napoleon Bonaparte, and James Madison, among others. They also explore how artists portrayed royal, republican, and imperial heads of state to promote authority; national, state, and provincial delegates to express the values of a faction, constituency, or class; and prominent merchants to depict the burgeoning influence of the citizen.

PART I: IMAGES OF AUTHORITY IN FRANCE AND THE UNITED STATES

The U.S. Congress’s State Portraits of Louis XVI and Marie-Antoinette: The Politics of Display and Displacement at the Capitol, 1800-1814   T. Lawrence Larkin

Bonaparte as a Republican   David O’Brien

Rivalries and Dissensions within the Maison de l’Empereur: Napoleon’s Portraitists and the Production of Diplomatic Gifts   Cyril Lécosse

Faces of the Nation: Physionotrace Portraits and the Invention of Political Modernity   Guillaume Mazeau

Signs of Power: Bonaparte and the Concordat of 1801  Kathryn Calley Galitz

Woman on a Wire: How Marie-Antoinette, d’Angiviller, and Vigée Le Brun Confounded Critics by Balancing Majesty and Maternity at the Salon of 1787   T. Lawrence Larkin

From Portrait to Plan: Mapping Capital Cities in France and the United States   Min Kyung Lee

“The essays…are all extremely accessible but also substantial in scholarship and argument….A fair number of the essays are about closing down on the subject—explaining and resolving it fully (e.g. Miles, Larkin)—so it was good to have an example of an essay (Cohen) that opened everything up and left the subject unresolved….There is a larger audience built into the book because it addresses both Americanists and French modernists, art and architectural historians, and cultural historians of the period.”

“The book’s introduction by Larkin provides historical context and discusses the purpose and structure of the book….The subjects of the portraits in the essays range from kings and queens to generals, politicians, and presidents, in addition to equestrian, family, and group portraits. Portraits of Napoleon Bonaparte and George Washington dominate. Interestingly, parts four and five present architecture and urban planning as a form of portraiture, with Mount Vernon, Monticello, and La Grange as reflective of their owners’ politics, and with ‘political portraiture…as a powerful metaphor to describe urban space’.…The documentation of the book is strong, with two to three pages of endnotes following each essay….Some of the plates are repeated in later chapters, which is helpful in allowing the essays to stand on their own without the need to flip back or forth to look for relevant plates….Overall it is an impressive work of scholarship and is a fine addition to the study of portraits and politics in the late eighteenth and early nineteenth centuries in the United States and France.”

What Ever Happened to the U.S. Congress’s Portraits of Louis XVI and Marie-Antoinette? Retracing the Events that Transpired at the Capitol, Washington, D.C., on 24-30 August 1814 (Philadelphia: American Philosophical Society, Spring 2021) – scholarly book