For many people who came of age in the twentieth century, initially a broad disk of black vinyl and then a compact disc of silvery plastic came to signify “music” in analytical and pleasurable senses. Visiting a music store or megastore-with-books-and-records was a regular ritual involving the perusal and sampling of albums, the exchange (and sometimes the defense) of alternative tastes with customers and sales clerks, the assembling and ordering of a personal collection by soloist, ensemble, and musical genre. I cannot help thinking that the tactility of these round recording units, protected by striking paper, cardboard or plastic containers, added something to their identity and mystique as music, to be judged in terms of authenticity of interpretation, depth of expression, and currency of rhythm. Call it a simple case of the “Twentieth-Century Blues,” but I lament the demise of this ritual.

I was cleaning out my hallway closet last weekend when I came upon a curious collection of sixteen compact discs masquerading as a single vinyl album and dated to 1997. Tinted a dull, metallic gold with white writing against black bands, the fourteen-inch square cardboard container was printed in checkerboard fashion with sixteen miniature album covers and inscribed, “Forever Classics: The Very Best Picture Discs,” offering “Over 19 Hours Paying Time On 16 CDs.” When opened, the folder revealed four vertical rows of four quarter-pockets, each nestling discs, the surface of which featured the composer’s last name hovering over a detail of an “old master” painting, the disc colored to match the printed thumbnail portrait of the composer beside it. Presumably this design was intended to initiate middle class consumers into the world of classical music, to be passed around the household in admiration of a bargain or venerated as a diptych of the most renowned seventeenth- to nineteenth-centuries composers.

Indeed, the Prism Leisure Corporation of the north London borough of Enfield had expended so much effort to make the musical selections seem abundant and chromatically appealing that an organizing principle for the recordings was difficult to detect. But on scrutiny of the playlist on the back of the folder, it became apparent that the outer rows of discs were devoted to concertos and symphonies from Vivaldi to Dvorak and the middle rows to violin and piano concertos from Mendelssohn to Grieg. As an art historian, my interest is in the apparent randomness with which the designer had paired these recent performances with old master paintings. Does a Nicolas Lancret harvesting idyll really sum up the intensity of Vivaldi’s “Four Seasons,” a Jacob van Ruisdael cloudscape with windmill increase the drama of Brahms’ “Violin Concerto”? 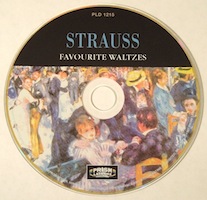 The anomaly I wish to focus on here is that between the blue-tinted “STRAUSS: Favourite Waltzes” label and Pierre-Auguste Renoir’s violet-blue Le Moulin de la Galette (1876) detail of young middle class men and women slowly dancing and calmly conversing out-of-doors. The text and music (“Blue Danube Waltz,” “Viennese Bonbons,” and “Vienna Blood”) work upon the image to suggest a Viennese biergarten rather than a Parisian café-restaurant. Why did the commercial designer select the Renoir instead of a Wilhelm Gause or another exponent of genre painting at the Düsseldorf or Vienna art academies? The property of the Musée d’Orsay, Le Moulin de la Galette is not only one of the most well known Impressionist paintings but also one of the most affordable to reproduce—hence its appearance in countless art history textbooks. 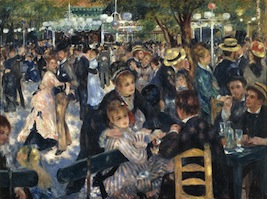 A canvas measuring roughly four by five and three-quarter feet presents the illusion of a meeting at a café with a large courtyard for dancing on a Sunday afternoon in summer. Even with the seeming arbitrary cropping of people, seating, and verdure, the picture is fairly well organized to either side of a diagonal extending from upper right to lower left. A figural pyramid in the center foreground serves as a pivot point between the two fields: a woman attired in deep blue leans over her younger sister garbed in a pink and gray stripe as she converses with an unidentifiable man in dark brown. The green bench acts as a line of separation between the unwed female and her chaperone and the male conversant in the foreground and between the dance floor at left and the seating at right. The painter has orchestrated a careful balance of warm and cool tints—pinks and yellows, blues and violets—to reproduce the effect of sunlight piercing the spindly trees overhead and casting mottled lights on skin and hair, straw and silk hats, muslin and wool garments, pavement and chairs throughout. Like Claude Monet, Renoir had learned a valuable lesson about knitting together objects of different forms and textures via a careful repetition of lights and shadows. Yet somehow the painting reveals itself as an accumulation of vignettes: of dancers who move formally, of those who embrace or kiss, and those still who can only watch dejectedly from the sideline. Parisian leisure during this period, Renoir would have it, consists of the rather wholesome habit of friends and acquaintances gathering at one of several music halls to exchange news and caresses.

Among the most interesting scholarship on Impressionism is that which seeks to explain the canvases in terms of their social significance. Mayer Shapiro, Robert Herbert, and others have pointed out that artists tended to incorporate signs of transformative industry into otherwise peaceable landscapes, of concentrated labor into boisterous bars and cabarets. Renoir devotes the top fourth of his scene to yellow-green treetops mingling with white lampstands and chandeliers and in this way admits the necessity of gas lamps for night illumination. But amid the whirling and mingling of patrons in the bottom three-fourths there is no sign of the garçons and verseuses who staffed such establishments. Did Renoir mean to imply that the people who frequented this establishment in the as yet undeveloped, windmill-dotted area around Montmartre themselves constituted a kind of working class, or that his artist and writer friends and paid working-class models could be assembled at this less fashionable locale for the purpose of communicating the joys of Parisian dance halls in general? I suspect the latter.

This stagey painting, the result of a structured composition and self-conscious poses, has none of the profundity of, say, Edouard Manet’s Bar at the Folies-Bergère (1881-82), where the melancholy barmaid Suzon challenges us to contemplate the realities of her existence. T. J. Clark in particular has written cogently about Manet’s determination to acknowledge the transformation of the Parisian café in the third quarter of the nineteenth century. The earliest cafés tended to assume the character of the proletarian, prostitute, or petit bourgeois workers of their neighborhood, and especially in times of political crisis the frequenters shared radical ideas and listened to ribald songs. But during the aristocratic phase of the Third Empire, these watering holes and popular chanteuses were cleaned up, “sanitized” to promote the illusion that bourgeois respectability and upward mobility available to all French. Manet represented his tightly corseted but expressionless verseuse standing behind a marble bar set with an assortment of alcoholic beverages and a mirror with a disjointed reflection behind to suggest the reality of her existence as one regularly propositioned by men unable to distinguish her hourglass figure from the bottled wares for sale. He thus produced a profound commentary on the nature of the bourgeois who reduces human relations to commodity bartering.

Renoir refused to acknowledge these deeper, more insidious social realities. He entered an undistinguished suburban dance hall at the moment other seedy cafés were being converted into fashionable establishments and transformed it into a place of universal merry-making, untroubled by questions of political conflict, economic disparity, and gender inequality. In this way, Renoir helped to transform the rough-and-tumble culture of modern Paris to accord with the new national myth of innocence and respectability. In a strange way, Strauss’ confident, gay melodies seem appropriate to Renoir’s musicians and dancers, for in this modern city, everybody is intoxicated with the prospect of being something other than they are.