December 31, 2022
by tlarkin
Comments Off on Northeastern Asia and the Northern Rockies

Northeastern Asia and the Northern Rockies: Treasures from the Los Angeles County Museum of Art and the Daryl S. Paulson Collection is a scholarly exhibition catalog published by Punctum Books. The philosophical ties between Northeastern Asia and the Northern Rockies as represented in a selection of fine art — including Daoist nature deities and immortals, Confucian scholar brushes and inkstones, and Buddhist guardian kings and compassionate bodhisattvas — have never been explicated. This catalog lays the groundwork for a serious discussion of trans-Pacific acculturation: first by explaining the fundamentals of Daoism, Confucianism, and Buddhism in reference to rare works of art produced in China, Korea, and Japan between the Tang Dynasty and the Qing Dynasty, and second, by assessing the prevalence of these philosophies as indicated by photographs of temples, shrines, deities, and rituals recreated in Idaho, Montana, Wyoming, and Colorado between the Civil War and World War I.

Drawing from the collections of the Los Angeles County Museum of Art and the Daryl S. Paulson Collection in Bozeman, Montana, Asian art curator Stephen Little offers three brief essays that distinguish the philosophies of Daoism, Confucianism, and Buddhism according to their founding values, each followed by several object case studies that illustrate, elaborate, and develop those ideals. Mining the photographs of the state historical societies of Boise, Helena, Cheyenne, and Denver, Euro-American art professor T. Lawrence Larkin offers a long essay that compares religious values and artistic forms on both sides of the Pacific illustrated by objects that highlight migrant and settler culture in the Inner West. Profusely illustrated with new color and rarely seen black-and-white images, and containing useful maps, chronologies, and an index, Northeastern Asia and the Northern Rockies is an invaluable reference for the general reader and an important resource for the regional scholar.

IV. Transpacific Transmissions: The Three Philosophies Manifested in Art and Ritual of Asian Migrants and Settlers of the Northern Rockies – T. Lawrence Larkin

October 27, 2021
by tlarkin
Comments Off on The U.S. Congress’s Portraits

What Ever Happened to the U.S. Congress’s Portraits of Louis XVI and Marie-Antoinette?  Retracing the Events that Led to the Conflagration of the Capitol and the Loss of the Pictures on 24-25 August 1814 is a scholarly monograph published by the American Philosophical Society Press. It revisits one of the greatest unsolved mysteries in American political culture. Conceived by Benjamin Franklin during a diplomatic mission, requested by the American delegates at the height of the War of Independence, and granted by the French king after the signing of the Treaty of Paris, these official full-length images of the French monarchs arrayed in ceremonial magnificence were recently identified as atelier copies after Antoine-François Callet’s Louis XVI and Élisabeth Vigée Le Brun’s Marie-Antoinette (both 1783) and traced through Congress’s successive assembly rooms at New York City (1785), Philadelphia (1790), and Washington (1800). The fate of the royal portraits has been difficult to determine due to the incomplete documentary record and conflicting eyewitness accounts. Larkin initially takes a telescopic approach to the problem, moving from British and French production of state portraits to assert political claims in North America and despoliation of Western European countries of their art treasures, to show British and American interests at stake in the practice of looting and incendiary warfare waged across the Great Lakes and the Chesapeake Bay prior to the destruction of the public buildings in Washington, D.C. He then pursues a microscopic approach, analyzing period documents, letters, images, and plans to test the viability of two theories—that the royal portraits were burned by British troops during their occupation of the capital or looted by American scavengers during the chaotic aftermath. While physical evidence of the portrait artifacts remains elusive, this study of the images as objects of desire, danger, and loss breaks new ground for scholars desirous of constituting an art and material history for the War of 1812.

Royal Portraits in North America and the West Indies

Theft and Conflagration in the North American Theater of Military Operations

American-British Warfare Across the Great Lakes

British Raids in the Chesapeake

To Attack, to Defend Washington, D.C.

Evacuation and Invasion of the Capitol

What the Ambassador Heard, What the Justice of the Peace Saw

Whether to Seek, to Replace, or to Forget 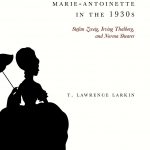 January 1, 2021
by tlarkin
Comments Off on In Search of Marie-Antoinette

In Search of Marie-Antoinette in the 1930s: Stefan Zweig, Irving Thalberg, and Norma Shearer is a scholarly monograph published by Palgrave Macmillan that follows Austrian biographer Stefan Zweig, American producer Irving Thalberg, and Canadian-American actress Norma Shearer as they attempt to uncover personal aspects of Marie-Antoinette’s life at the French court in the late eighteenth century and to dramatize them in biography, cinema, and performance for public consumption during the 1930s. The first chapter establishes the core subject as an inquiry into the respective contributions of Zweig, Thalberg, and Shearer in formulating an “objective” or “authentic” image of “Marie-Antoinette.” The three chapters that follow examine in some detail how Zweig pursued research and drafted the psychological biography at his Salzburg home, Thalberg acquired film rights to the best-selling book and fought the censors to preserve the more sensational aspects of the screenplay at the Culver City studio, and Shearer worked closely with a new producer to give the script a strong romantic angle and to perform the character of the queen on the sound stage. The professionals’ research standards and strategic objectives are weighed in the formulation of a new myth at once sensitive to the historical record and suited to the leisure market. The author’s painstaking research makes it clear that all three protagonists strove for historical precision in their characterizations of the eighteenth-century queen and her court, though with different degrees of self-awareness as shapers of a potent twentieth-century myth of “Marie-Antoinette.”

Introduction: In Search of Marie-Antoinette: The Inscrutable Life Worth Scrutinizing

Structure and Method of the Argument

Western European Approaches to Illustrated Biography in the 1920s

Zweig’s Approach to the French Revolution

Structure of the Argument

European and American Approaches to Historical Film in the 1920s

Thalberg’s Introduction to the Zweig Property

Indicating the Revolutionaries, or How to Generate Sympathy for Monarchs in Spite of Their Ineffectualness

Thalberg on Playing a Historical Character

Euro-American Approaches to Historical Roles in the 1930s

Shearer’s Recommitment to the Marie-Antoinette Role

Before and Behind the Cameras: Shearer’s Acting Technique and Production Oversight

The Two Faces of Marie-Antoinette, or How to Sell Sin and Atonement

To make Marie-Antoinette Live Again: The Art of Rendering Clear and Mixed Passions

Shearer on Public Response to Her Performance

“Objectivity” in Biography, “Authenticity” in Film

“This is an important book for our library!”

“This gets my award for best reception history book of the year! It is simply fabulous!” and “It’s a great piece of research underpinned by a strong idea. It reads as an archaeology of film. I thoroughly enjoyed it and learned loads.”

“T. Lawrence Larkin’s In Search of Marie-Antoinette in the 1930s is a game changer. He builds upon his considerable expertise in art history—the representation of the dubious queen in oil painting—as a framework for exploring a particular classical Hollywood biopic, MGM’s Marie-Antoinette (1938). Not only does the book give reason to attend more carefully to the bio-pic in late 1930s Hollywood, it also provides a sterling guide for how to do production studies at its most sophisticated level. Larkin’s attention to literary studies (the author Stefan Zweig), film studies (the producer Irving Thalberg), and performance studies (the actress Norma Shearer) provides a beacon for what the humanities should look like in the twenty-first century, interdisciplinary and brazenly expansive in its scope. The age of academic disciplinary boundaries is coming to an end, and Larkin’s book hammers a significant nail into its coffin.”

“Like everything Professor Larkin has written about Marie-Antoinette and her image (how she related to her own image, how she contributed to shaping it, or—like here—how the queen’s image and character have been explored on screen and in literature), this book is excellent reading and very thoroughly researched. I warmly recommend it to those with an interest in the fascinating dialogue historical figures keep having with movie makers and intellectuals turned biographers….Many useless and repetitive books are written about Marie-Antoinette. This original way of exploring how she has fascinated so many—and keeps doing so—will appeal to many. A great book!”

“A Little (En)light(ened) Reading: Marie-Antoinette and the Image of Moral Instruction,” in Zeitschrift für Kunstgeschichte (2023) – scholarly article in journal