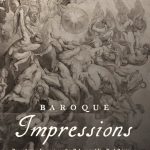 Baroque Impressions: Reproductive Engravings after Rubens and Van Dyck Paintings ca. 1620-1860 is a catalog published by the School of Art to accompany the ground-breaking exhibition that was held in the Dean’s Gallery of the College of Arts and Architecture at Montana State University from 2 November to 28 December 2018. It is edited by T. Lawrence Larkin, Associate Professor of Seventeenth- to Nineteenth-Century European Art, and comprised of essays written by Kearstin Jacobson and Dani Huvaere, and object entries written by Larkin, Jacobson, Huvaere, Audrey Moss, Robin Anderson, and Stormy DuBois. This publication explores the historicizing impulse behind thematic displays of Rubens and Van Dyck paintings and discusses important images by reproductive printmakers—from Lucas Vorsterman, Hans Witdoeck, and Jonas Suyderhoef in the seventeenth century to William Sharp, Ferdinand Joubert, and David Desvachez in the nineteenth century. Copiously illustrated, this volume is intended to stimulate discussion about the formal and conceptual relationship between paintings and engravings, invoking issues of artistic originality and variation, market developments, and thematic collecting.

With Art Direction by Bruce Barnhart and Design by Audrey Moss

“The participation of these print dealers and scholars has demonstrated that the construction of a ‘baroque picture gallery’ from ‘ephemeral print media’ is a real possibility in the present age, bringing rare and far-flung cultural resources to communities in the Northern Rockies and facilitating collaborative research among faculty, independent scholars, and graduate students.”

“Larkin decided to focus on reproductive etchings and engravings after the major master works of Rubens and Van Dyck. He reached out to print dealers in New York and Belgium, who collaboratively negotiated to allow Larkin to obtain the right components for an exhibition with ‘wonderful thematic coherence.’”

“[Reproductive engravings] could…be sold for a price that, while still out of budget for the average worker, would have been accessible to those who depend on it for their own livelihood. ‘An artist would have seen it as indispensable to his progress,’ said Todd Larkin…The prints would be used to disseminate art news, to brag about collections or for artistic study. ‘Engravers democratize the image,’ Larkin said. ‘More people saw them through the engraving than the original painting.’”

“Splendid pieces.” “Beautifully displayed!” “Incredible and educational.” “This show touches me.” “Wow, Fall of the Damned really is intense. What a print!” “I’d love to have the opportunity for more exhibits such as this!”

What Ever Happened to the U.S. Congress’s Portraits of Louis XVI and Marie-Antoinette? Retracing the Events that Transpired at the Capitol, Washington, D.C., on 24-30 August 1814 (Philadelphia: American Philosophical Society, Spring 2021) – scholarly book